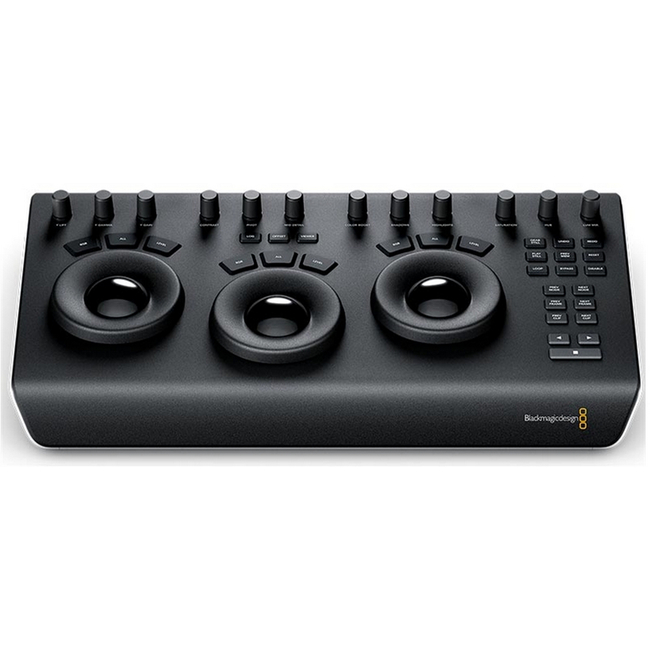 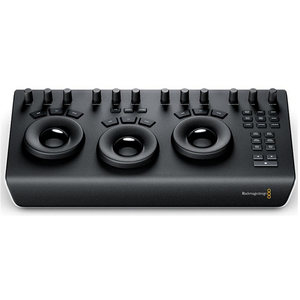 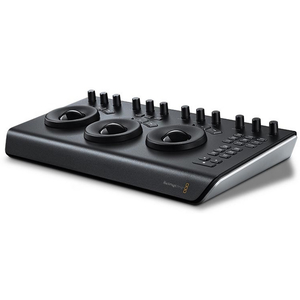 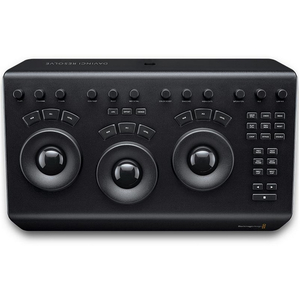 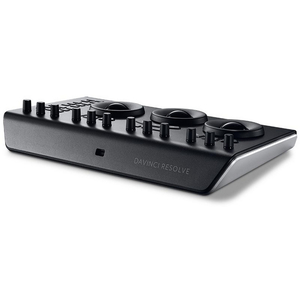 The DaVinci Resolve Micro Panel is a high quality, portable low profile panel that features three high resolution trackballs and 12 precision machined control knobs for accessing all essential primary color correction tools. Above the center trackball are keys for switching between log and offset color correction, as well as a key to display DaVinci Resolve’s full screen viewer, which is great for use with laptops. Eighteen dedicated keys on the right side also give you access to the most commonly used grading features and playback controls. DaVinci Resolve Micro Panel is perfect for independent editors and colorists that need a truly portable solution, great on set to create looks and evaluate color and lighting, ideal for quickly grading video in broadcast trucks, great for education and much more.

To take your color grading to the next creative level, the DaVinci Resolve Mini and Micro panels include 12 dedicated primary color correction control knobs. These are designed to make it easy for you to stylize the look of your images and generate precise “film looks.” All knobs can be pressed to instantly reset the control. That’s perfect for when you are trying an exciting new style but get a bit lost. Simply press the knobs to reset.

Adjust the contrast of the image in the darker areas, specifically in the Y (luminance) channel only. This adjustment is great for a changing the black point without changing saturation.

Adjust the contrast of the image in the mid-tone areas, specifically in the Y (luminance) channel only. This control helps add depth to shots, along with extra vibrancy.

Adjust the contrast of the image in the brighter areas, specifically in the Y (luminance) channel only. You can reduce hot shots or pull the whites to make the shot look more angelic.

Changes the center of tonality about which dark and bright parts of the image are stretched or narrowed during a contrast adjustment.

Naturally raise the saturation in regions of the image with low saturation while leaving properly saturated areas alone. Sometimes referred to as a vibrance operation, this is great for adding color without over saturating the image.

Easily retrieve blown out highlight detail in high dynamic range media by lowering this parameter to achieve a smooth blend between the retrieved highlights and the unadjusted mid tones for a natural result.

Increases or decreases overall image saturation. At higher values, colors appear more intense, while at lower values color intensity diminishes and can be adjusted until all color is gone, leaving a grayscale image.

Rotates all hues of the image around the full perimeter of the color wheel. The default setting is 50, which retains the original unaffected distribution of hues.

Control the balance between the YRGB adjustments and Y only adjustments made using the Y channel lift, gamma and gain controls in the primaries palette or the un-ganged luma curve.

Trackballs provide RGB balance adjustments for lift, gamma and gain, each with a master level control. The Advanced panel also features a dedicated RGB offset and master gain trackball to adjust the tint and brightness of the entire image. The trackballs can be set to work in either log or RGB with the touch of a button.

The buttons and keys on the DaVinci Resolve control panels illuminate when selected so you can easily see which controls are active. On the Advanced and Mini panels, the keys are also backlit, making it easy to clearly see each button in a dimly lit suite.

The DaVinci Resolve Advanced and Mini panels include dedicated feature buttons that let you quickly change tools so you don’t have to switch back and forth between the mouse and panel. With the push of a button you can easily access tools such as the RAW palette, primary color correctors, curves, qualifiers, windows, tracker and more.

The play forward, reverse and stop transport keys on all the panels give you full control of your project timeline or deck while the Advanced panel adds a jog/shuttle knob for faster and more precise scrubbing.

The DaVinci Resolve Micro Panel is fully powered via USB so you can simply plug and play to get up and running. Power over USB means you can use it with a laptop and it will operate from the laptop’s battery, making it ideal for on set grading. The DaVinci Resolve Mini Panel also includes ethernet so it can operate via your network, making it fantastic for larger facilities. Plus, the ethernet PoE support means it can even power itself via the network connection so you don’t need to plug in the power connection. 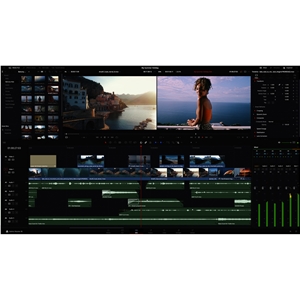 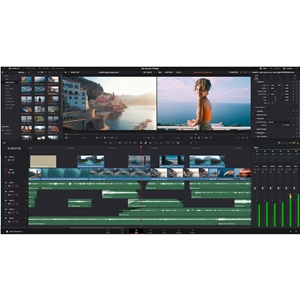